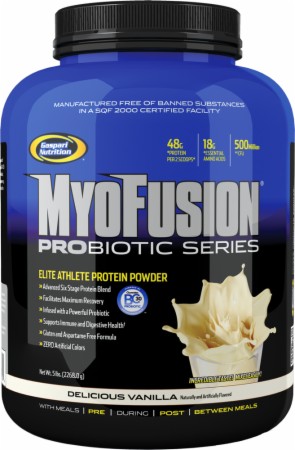 Gaspari nutrition “was” a great name in the sports supplementation industry. Yes, you read that right it was a great name for me. I was a big fan of this company and all their products were superb and really effective.

I have been using MyoFusion (the older version) for a year now and it has been a brilliant product that used to rule over many other proteins on the market. Gaspari Superpump 250 and PlasmaJet were two other awesome products from the same company which are sadly now discontinued. I can’t figure out any reason for shooting a bullet in your own foot but that’s what Gaspari have done in my opinion.

So I am pretty disappointed with the new MyoFusion Probiotic Series supplement. The only good thing left in the new version is the taste and rest of the good has gone. I bought a 5 lbs tub a few weeks back for $60 from a local store here in Cinnamon Roll flavor and I must say this is such a unique and awesome flavor this company has developed. I loved drinking this in milk.

However, Gaspari Nutrition is now fooling customers over the new ingredient profile.

That’s 100% the truth. They have replaced great ingredients with cheap fillers in the profile. Micellar casein is the best way to delay the release of protein to the bloodstream from the gut, and it replenishes the blood leucine levels for longer periods than whey protein. But micellar protein is expensive right now so they have replaced it with sodium caseinate which is even cheaper than whey protein concentrate!

Also, no “completely” hydrolyzed whey protein in the newer version either. And what is with the notion of adding brown rice protein to this supplement? Many companies that make cheap and nasty supplements will add soy protein isolate as fillers to fool people who don’t know better. Here they are adding brown rice protein. The scoop size has gone up by 3 grams and protein has reduced by 1 gram. Initially, it was 25 grams protein in 36 grams scoop and now it is 24 grams in 39 grams scoop. The company was also in the news for a scandal about protein amounts being significantly lower than their stated claims when tests for protein percentage were done.

As I said before, it tastes great. I don’t know about other flavors but Cinnamon Roll tastes excellent. 10/10 score for this.

Mixability is just fine. It mixes well in water but there were some clumps in the milk. So, I will give it 8 out of 10.

They added probiotics which are useless or rather ineffective. I got bad bloating and flatulence which was far lesser in the older version. Poor digestibility calls for a score of 3/10 in my opinion.

It’s fine for the cost it now comes at. I used this 3 times a day and there were some gains during the period I used it. No change in strength, but it is now an average protein. I will say 8/10 for the effectiveness.

Will I recommend it to anyone? No.

The sales have dropped down and the two legendary products Gaspari Myofusion and the Super 250 are gone as far as I’m concerned. And so is the success rate of the company.

I started weight training a few years ago, but nothing serious. I had no real reason, I was very small, I weighed around 135 pounds but I really didn't care. All I wanted to do was work on my biceps and chest. So I made a decision that if I am going to do this I might as well put my heart and soul into it. Bodybuilding now has played a large part in forming my personality. It has given me the discipline that life success demands, and the determination to overcome obstacles. When I work out, my ambition is to push my body harder and harder every time to see how much it can take how much pressure it can stand. I don't make predictions, I just train hard! "The only thing about a man that is man is his mind. Everything else you can find in a pig or a horse."
You might also like
Gaspari NutritionProtein

Anavite Reviews (Gaspari Nutrition)
9.0
4.5
Be the first to comment!
Leave a reply »