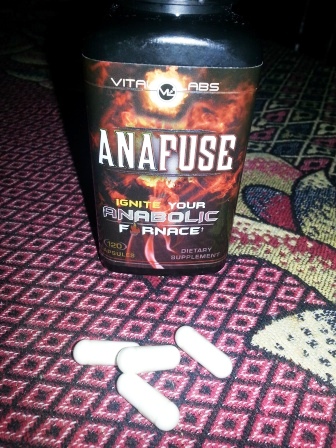 I was reading reviews on anabolics and thought I would give Anafuse a try to see if it’s as good as people say it is.

What Does It Do?

Before taking this product I had no idea what the ingredients were and what they do, so I did a little research on Epicatechin, 5a-hydroxy- laxogenin, HICA and vitamin D (I know what that does). Here’s the bottom line of what I found:-

Marketing claims for 5a-hydroxy-laxogenin say it is the only product ever designed to increase mass and strength without steroidal influence, and that it doesn’t test positive for steroids.

So How Did It Work For Me?

The first week I worked up to 2 servings of Anafuse a day because I had no idea how my body was going to react to the ingredients in it. For 3 days I used 1 serving, and then upped it to 2 servings, thus 4 tablets. So I was taking 2 in the morning with a meal, and another 2 six hours later with a meal.

At this point I did not feel anything other then my pre-workout doing it’s job.

The second week was no different than week one. No noticeable PR’s, but by the end of week to I did notice a difference in endurance and I knew it was not the pre-workout so it had to be Anafuse starting to show some signs of kicking in.

At this time I was eating like a beast, was hungry more often than usual – and my endurance was top. I could go on and on without feeling tired. My rest time between sets was also shorter. I usually rest 60-90 seconds between sets, and now I was recharged in 30 sec. Anafuse really shines on endurance I can tell you that.

So a lot of the people that took this product say they began to see strength results at around week 4. And for me it was the last 2 days of using Anafuse – you can say week 5 because I started with one serving and was left with 2 servings by week 5.

My strength definitely went up those last 2 days, and those days were my favorite workout days of my whole bodybuilding journey! The lifts that were hard for me before became a lot lighter, and I was able to increase the amount of reps I was doing.

By now my weight was 72.9 kg, that’s almost one kg of muscle in just 4 weeks. To be honest I did not notice anything in the mirror except that my muscles were a bit tighter than usual. I do not think that you should run Anafuse for only 4 weeks. To feel the true effect of it you should run it for 8 weeks and then you will reap the true benefits.

So next time I will run Anafuse with Ostapure or another SARM product.

I did not experience any type of nasty side effects, nor did I see any decrease in libido. Also I haven’t heard of any side effects while taking Anafuse.

Overall this seems like a really legit product if you run it for 8 weeks.

If you give it a try, I’d be really interested to know how it works for you – you can add your review or comments below. 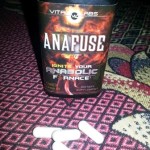