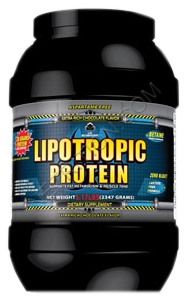 I have been eager to try the products from this company so when I found LG Sciences Lipotropic Protein in a local store I decided I must give it a try.

The 5 lbs tub costs nearly $35 and it’s about $15 cheaper than other whey proteins. I didn’t purchase it for the fat burning effects. I really don’t believe that it can reduce fat directly, but I found it helpful to raise my metabolism as I noticed a certain level fat reduction at the end of the day.

What Do You Get?

So let’s begin my review of Lipotropic Protein by telling you the contents per serving. You get around 26 grams of protein with every serving. There are in total 69 scoops in a 5 lbs tub, which will cover you for 35 days if you just take them after your workout. I took 3 servings every day in water at different times – in the morning, before and just after my workout.

There is betaine anhydrous added in the product. It is believed to improve the metabolism of fat and reduce the amount of adipose tissue in the body. However, there are some studies showing no effect of the betaine in humans. Betaine works in pigs though, and pigs are supposed to be genetically close to humans!

As you open the black colored tub you can’t smell any strong odor as often happens with other whey proteins. The formulators wanted this to be very low carb and low calorie so there aren’t any added sugars which to me means the taste isn’t going to great. I love to taste thick protein shakes – like those you get from Gaspari and Optimum Nutrition.

I mixed it in water and LG’s Lipotropic Whey mixes well in water without any significant clumps. It may take some time but a few whips or shaking for just a short time will mix it well. I didn’t try it in milk – I stopped dairy and reduced carbs in my diet while using this protein powder.

The taste isn’t good as I said before, as it isn’t sweetened well. That might not bother some but I prefer sweet. I bought chocolate flavor and I must say it tastes bad. I am a chocolate lover but never liked drinking this protein when I started using it but later on I managed to get accustomed to it and ignore the taste. So that’s a bit of a let down for Liptropic Protein which is a great product otherwise.

Digestibility is excellent. There was no bloating with this whey protein. I kept things simple and never mixed it in milk or other stuff. I don’t know why it happened but I wasn’t feeling too much of an appetite while using this product. I don’t see any reason why the ingredients in would suppress my appetite though.

How Well Does It Work?

Most guys won’t say it burns fat. Even I don’t believe it directly burns fat but I will say it improves your metabolic rate. It has just 115 calories in a scoop so it can help you lose weight easily without worrying about the extra fat or the additional calories. This protein aids fat loss by boosting metabolic rate as whey has its own BMR raising effect owing to its protein content.

So I will buy it again when I get into my next cutting cycle. I reckon it’s a better option even than isolates because it has almost no sugar added to it and you can go for about 100 grams of carbs a day to reduce the fat percentage in your body while using LG’s Lipotropic Protein.

What To Do With Old Protein Tubs?

Monster Milk Reviews (Cytosport)
8.7
8.4
Be the first to comment!
Leave a reply »